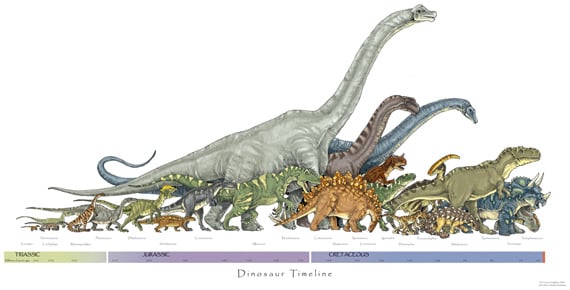 Our Dinosaur Timeline print shows the evolution of the great creatures, from their small beginnings in the Triassic to their extinction in the Cretaceous. Dinosaurs were among the most spectacular and successful creatures that ever existed. They roamed our planet for 150 million years, lived on every continent and evolved into an amazing variety of forms. Dinosaurs were animals that had scaly skin and laid eggs. Evidence suggests some species cared for their young in the nest. They dominated the earth until a combination of disasters caused their extinction 65 million years ago, but one group of dinosaur descendants survives - the birds.
Printed on heavyweight stock, 15"X30", ships rolled in a sleeve.